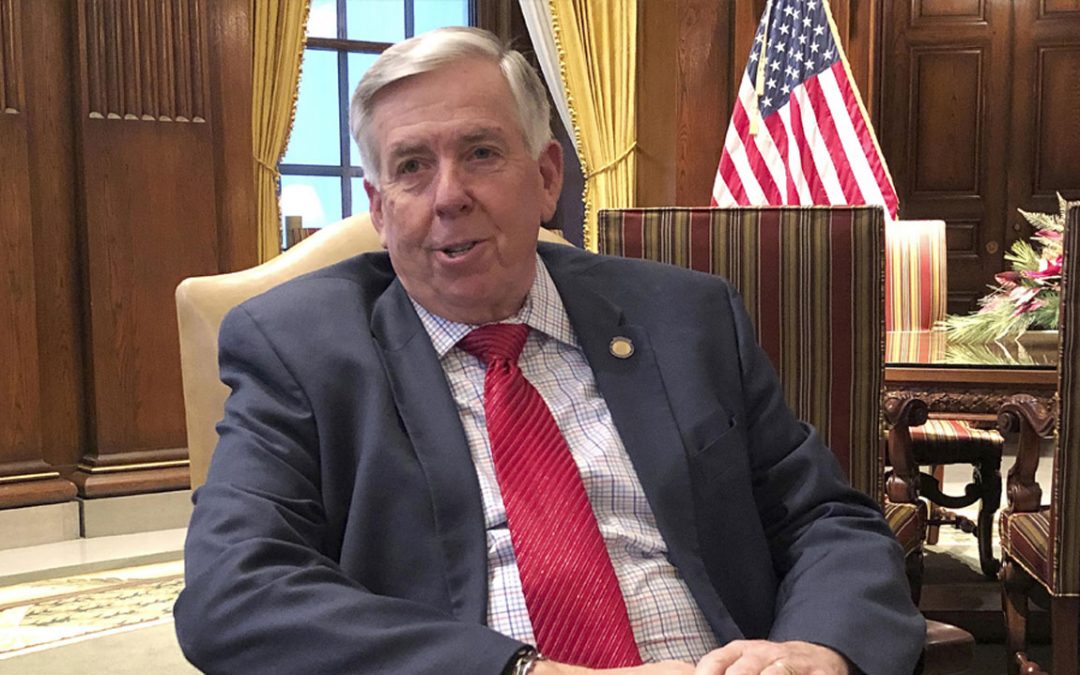 A day ahead of a visit to Joplin to address state infrastructure and public safety, Gov. Mike Parson addressed members of the Missouri press corps Thursday to further advocate for and explain his plan to use bonds to pay for repairing 250 bridges across the state.

Speaking at the Governor’s Mansion as part of the annual Missouri Press Association’s Day at the Capitol, Parson broke down his method and rationale for selecting the 250 bridges that would be repaired or replaced using $350 million in bond proceeds. The state Legislature would need to approve the bond issue that would be paid for with general revenue at $30 million annually over 15 years.

Much of the pushback Parson has received over the plan has come from legislators who believe the list doesn’t include enough bridges in their district. Kansas City and St. Louis both have four bridges on the list.

In his remarks Thursday, Parson said that using the borrowed money would remove those 250 bridges from the state’s five-year road and bridge construction schedule, thus moving up other, larger projects. All 250 bridges on the list are projected to cost less than $8 million each to repair.

“Taking out these projects frees up $350 million on the five-year STIP (which stands for Statewide Transportation Improvement Plan) for all the other projects to accelerate, many of which will have federal money available to draw down,” Parson said. “When you put everything together, it’s going to be about $1 billion worth of construction, and that’s what was important about doing it this way.”

The proposal includes four bridges in Jasper County, among them the bridge on Range Line Road over the Kansas City Southern Railway Co. tracks in Joplin. Parson today is scheduled to visit the bridge, which is estimated to cost $5.936 million to rehabilitate.

Parson’s proposal comes after voters rejected a gas tax increase in November that would have bumped up the tax by 10 cents over a five-year period. The Legislature has the ability to raise the gas tax up to a certain amount without a vote of the people, but Parson said he doesn’t see that happening this session.

“For the most part, Missourians are not very willing to increase taxes, and that’s just the way it is,” Parson said. “The bottom line is that the problem still exists, and we have to find a solution.”

Members of the Missouri Press Association also took Thursday to lobby legislators to keep laws on the books that require legal and election notices to be published in newspapers. Secretary of State Jay Ashcroft in a testimony to the House Budget Committee on Wednesday said frivolous initiative petitions are filed every year, and publishing the propositions and amendments in 2018 cost the state $6 million.

Because the 2020 fiscal budget does not include an election with petitions or referendums, only $1 is budgeted as a placeholder, but “maybe next year we’ll be back asking for $6 or $7 million if you don’t fix the problems,” Ashcroft told the committee.

Parson addressed the issue Thursday, saying he’s “always been a supporter of public notices,” but that “the media themselves could come together and see if there’s a better way to do those.”

Lawmakers have been floating proposals to revamp the initiative petition process, which could include filing fees and raising the vote threshold for approving constitutional amendments, something Parson indicated support for.

“I think it’s a very worthwhile discussion, especially when you start talking about the constitutional amendments,” Parson said. “It’s important to remember that it is the people’s right to change the constitution … but I think it wouldn’t hurt to make that bar a little higher.”